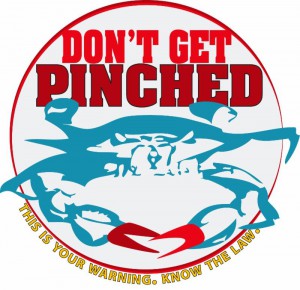 For the second summer, the Maryland Natural Resources Police is rolling out its blue crab enforcement campaign on the Chesapeake Bay and Potomac River under the banner, “Don’t Get Pinched.”

“‘Don’t Get Pinched’ is our way to remind everyone ─ recreational and commercial crabbers alike ─ that our officers will be on the water, on the docks, at wholesalers and at roadside stands to ensure that everyone plays by the rules,” said Col. George F. Johnson IV, NRP superintendent.

The campaign takes aim at those who ignore regulations on minimum sizes, harvest limits and hours, and crab pot registrations. Officers also will be on the lookout for recreational crabbers who keep female crabs, which is illegal in Maryland.

“We will use every enforcement tool available to us, including saturation patrols, undercover operations, night-vision equipment, and the cameras and radar units of the Maritime Law Enforcement Information Network,” Johnson said.

The reason for the effort is based in science, explained Brenda Davis, chief of DNR’s Blue Crab Program.

The 2015 Blue Crab Winter Dredge Survey showed the abundance of spawning-age females was 101 million, a substantial rise from 2014 when adult females were considered depleted. Despite the increase, the number of adult females remains well below the peak levels recorded in 2010 and 2011, and below the established target level of 215 million crabs.

Size, season and harvest limits are the essential management tools natural resource scientists use to protect fish and crabs from being over harvested. Illegal crabbing is a major threat to the sustainability of Maryland’s blue crab population.

“We are careful about limiting the number of crabs we harvest so there will be enough crabs to reproduce and replenish the supply, which will provide good crabbing in the future,” said Davis. “When crabbers cheat and ignore the rules they diminish opportunities for everyone, especially our children and grandchildren.”

This year, Potomac River regulators are joining their Maryland counterparts to get out the “Don’t Get Pinched” enforcement message, said Martin Gary, executive director of the Potomac River Fisheries Commission.

Gary said that with temperatures rising in Maryland waters and crabbing activities reaching their peak, now is the time to know and follow the rules.

“Unless we do our part to protect them, a part of our cherished summer tradition could be in jeopardy,” Gary said.