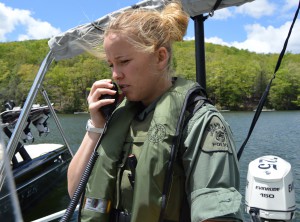 As the summer recreational boating season gets into full swing, the Maryland Natural Resources Police will join this weekend with the Coast Guard and other maritime law enforcement agencies for Operation Dry Water, a nationwide crackdown on alcohol- and drug-impaired boaters.

From Deep Creek Lake and the Potomac River, to the Chesapeake Bay and the Atlantic Ocean, NRP officers take part in saturation patrols beginning Friday, looking for boaters whose blood alcohol content exceeds the state limit of .08.

The goal of the three-day campaign that combines messages about the dangers of boating under the influence and an increased police presence on the water, aims to drastically reduce the number of accidents and deaths due to impaired boating.

“Protecting the public goes to the heart of our mission,” said Col. George F. Johnson IV, NRP superintendent. “Alcohol and drugs can have a profound effect on a boater’s judgment, balance, vision and reaction time. Operation Dry Water makes it clear that Maryland has no tolerance for alcohol- or drug-impaired boaters.”

The maximum penalty in Maryland for operating a vessel while impaired by alcohol is a $1,000 fine and a year in jail for the first offense.

Last year NRP arrests for operating while impaired spiked to 206 from 124 in 2012. Statistics show alcohol was a factor in 12 percent of the 127 boating accidents recorded in 2013.

In addition to dulling judgment and senses, alcohol also can increase fatigue and vulnerability to cold-water immersion, Johnson noted. Other factors such as sun, wind, noise, vibration and motion intensify the side effects of alcohol and drugs.

“Sadly, one impaired boater’s poor decisions can have a ripple effect, harming passengers and people in the water and on other boats,” Johnson said.

During their patrols, NRP officers also will be checking vessels to ensure required safety equipment is on board and operators are maintaining a proper lookout.

Operation Dry Water was initiated by the National Association of State Boating Law Administrators (NASBLA) in 2009. Since its inception the campaign has resulted in the arrest of 1,875 impaired operators from the nation’s waterways. Last year, law enforcement officers contacted 146,711 boaters, made 318 arrests for impaired operation, and issued 18,607 citations and warnings for safety violations.

Over the past five years in Maryland, officers participating in the campaign talked with more than 11,000 boaters and conducted nearly 6,000 vessel safety checks. They charged 59 people with alcohol and drug violations.