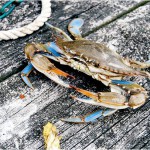 Adult females are no longer depleted, but remain at low levels

The Maryland Department of Natural Resources today released the 2015 Blue Crab Winter Dredge Survey results, which showed the abundance of spawning-age females was 101 million, a substantial rise from 2014 when adult females were considered depleted. Despite the increase, the number of adult females remains well below the peak abundances observed in 2010 and 2011 and below the established target level of 215 million crabs.

Juvenile crabs increased 35 percent from 2014, and more than doubled from the record low in 2013.  The 2015 juvenile abundance of 269 million crabs is just above the 26 year average of 261 million.  The total abundance of crabs — which include juveniles, and adult males and females – was approximately 411 million. The crabbing harvest remained at a safe level for the seventh consecutive year.

These results, taken in historical context, illustrate the inherent variability of the blue crab population and the complexities of managing this dynamic fishery. A number of environmental factors contribute to crab abundance, including winter temperatures, coastal currents, weather patterns and natural predators.

Once again, weather contributed to substantial mortality. It is estimated that 19 percent of adult crabs perished in the cold temperatures this past winter.

“Despite the harsh winter temperatures, we are pleased that crab numbers increased,” said DNR Secretary Mark Belton. “This is good news for the crabs and for Marylanders who enjoy them all summer long.”

Maryland, Virginia and the Potomac River Fisheries Commission remain committed to collaborating on the management of the blue crab population, added Secretary Belton.

In May, the Chesapeake Bay Stock Assessment Committee (CBSAC) will conduct a complete examination of the blue crab data including dredge survey results and complete 2014 harvest information. The results of this analysis will be presented in the 2015 Blue Crab Advisory Report due out in early summer.  Maryland officials will evaluate the results of the report, review input from stakeholders and work with partners for the long-term health of the species.

University of Maryland Center for Environmental Science Chesapeake Biological Laboratory professor Tom Miller noted that: “Managers acted to ensure the crab stock is no longer depleted as it was last year, and if we maintain exploitation rates close to the target the crab population will continue to increase over the long term.”

DNR and the Virginia Institute of Marine Science have conducted the primary assessment of the Bay’s blue crab population annually since 1990. The survey employs crab dredges to sample at 1,500 sites throughout the Chesapeake Bay from December through March. Sampling during winter, when blue crabs are usually buried in the mud and stationary, allows scientists to develop, with good precision, estimates of the number of crabs present in the Bay.