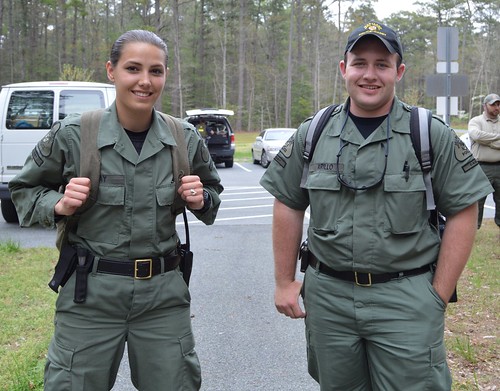 Marguerita Gay of Parkville and Vinnie Arillo of Stevensville successfully completed the NRP cadet program and were just selected to attend the NRP Academy.

The Maryland Natural Resources Police has opened the hiring process for seven young men or women to join its cadet program.

The cadet program is the law enforcement equivalent to a paid internship, allowing the individuals to not only experience firsthand the life of an NRP officer but also to participate in other areas of the Department of Natural Resources, such as fisheries, state parks and wildlife.

In the past two years, seven cadets have made the transition to the NRP Police Academy. One of them already has graduated and joined the ranks of field officers.

Candidates for these full-time positions must be between 17 and 19 years old to apply, and between 18 and 20 years old to be hired. They must have either a high school diploma or high school equivalency certificate. Candidates must be citizens of the United States and establish residence in the State of Maryland prior to appointment.

Applicants will have to pass rigorous physical and psychological tests, and undergo an intensive background check. A demonstration of the elements of the Functional Fitness Assessment Test, including the correct position for push-ups and sit-ups can be viewed online.

Online application is strongly preferred and can be accessed directly here, or via search at jobaps.com/md. The salary and benefits schedule is at that site as well. The deadline to apply is April 20.