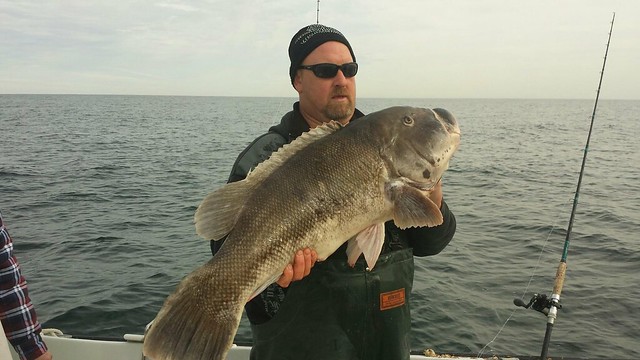 Kenneth Westerfeld of College Point, NY reeled in a 28.8-pound tautog 20 miles southeast of Ocean City while fishing in about 75-feet of water with Captain Kane Bounds on the charter boat Fish Bound.  Maryland’s previous record was a 23-pound tautog caught by Charles Donohue near Ocean City in 2012. The current world record is 25 pounds.

“Ocean City is the best place for big tautog,” said Westerfeld. “The water clarity is very good and the offshore wrecks hold some really big fish. I’ve been fishing very hard for over 20 years to catch a 20 pound tog.”

Westerfeld intends to keep up his pace and fish Maryland’s offshore reefs as often as he can. “Maryland has the most prolific tautog fishery. I believe there is a bigger one out there,” he said. 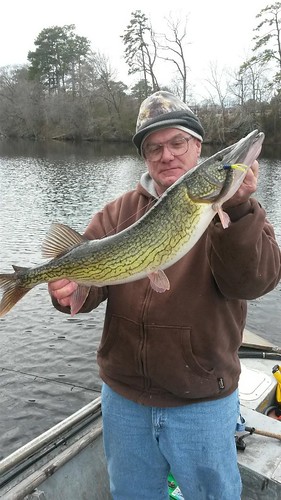 Meanwhile, Lee Haile III of Towson was catching and releasing chain pickerel with his son and a friend in an unnamed Eastern Shore pond near Salisbury when the line came tight to what turned out to be an eight pounder.

“I’ve been fishing for pickerel for over 38 years, and I just knew this one was exceptional,” he said.

According to Haile, the fish made a couple of strong 30-foot dashes, circled the boat twice, dodged the net, dove under the boat, and finally came onboard. “When I saw the fish in the boat, I said that we needed to go in because this could be a record fish.”

The current world record is nine pounds, four ounces caught in 1961 in Georgia.

DNR maintains State records for sport fish in three divisions ─ Atlantic, Chesapeake and freshwater ─ and awards plaques to anglers who achieve new records. To report a potential record catch, call 443-569-1381 or 410-260-8325. Anglers should keep their fish immersed in ice water to preserve its weight until it can be checked, which can be done at a seafood retailer, a grocery store, or tackle shop with a certified scale.

Fish caught from privately-owned, fee-fishing waters are not eligible for record consideration.

The Maryland State Record application and a list of records are located on the DNR Fisheries website.