The Maryland State High School Football All-Star Game, started the Maryland Crab Bowl in 2008. It features some of the state’s most talented senior high school players from public and private schools.

In 2012, the Maryland Army National Guard began to sponsor the event and is now the primary sponsor. Players wore Maryland Army Guard-inspired jerseys. Each displayed one of the seven Army Values in place of a player’s name, a jersey number done in the Universal Camouflage Pattern, a shoulder sleeve insignia from one of the major Maryland Army Guard commands on one shoulder, and a U.S. flag on the other.

“We wanted to put a face and a personal connection with all of the teams and with the program statewide,” said Lt. Col. Amy Bennett, commander of the Recruiting and Retention Battalion. “We also started a values program with the Crab Bowl. Not only are the players wearing the values on the backs of the uniforms, [but] we also sponsor an Army Values award.” The participants learned about the Army Values on the first day of practice. On the last night of practice, peers nominated the winners, those who embody these values the most. The coaches of each team voted on a player that epitomizes all of the Army Values: loyalty, duty, respect, selfless service, honor, integrity, and personal courage. That selected person, on the winning team, receives the LDRSHIP Award.

“It’s an unbelievable partnership. We talk to the kids about the [Army] Values and about playing football,” said Sean O’Connor, director of business operations for the Mid Atlantic Football Foundation. “It’s such a natural fit for those kids, and it’s a natural partnership of the two groups – the best football people in the state and the best armed services in the world.”

Football scouts often attend the event, and several Crab Bowl alumni have made it to the NFL, like Brandon Copeland who plays for the Baltimore Ravens and Terrance Garvin who plays for the Pittsburgh Steelers. The game kept the crowd on edge and the excitement could be felt throughout the stadium. In the end, Washington won against Baltimore 30-21.

“These young student-athletes understand the dedication and commitment it takes to work together as a team for a common goal,” said Brig. Gen. Linda L. Singh, commander, Maryland Army National Guard. “In the Army National Guard, we share these same values.” 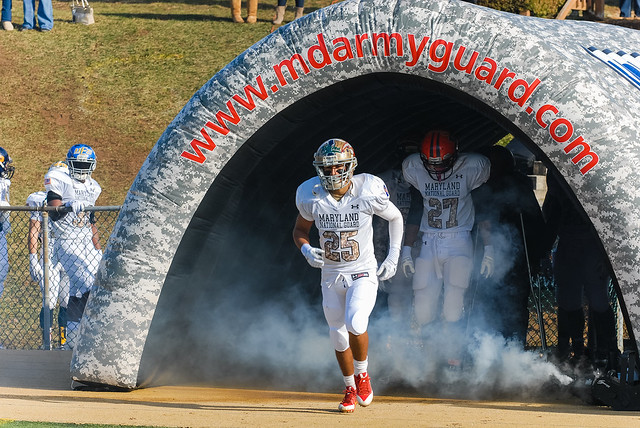