BALTIMORE (June 25, 2013) – Firefighters of Baltimore’s Engine Company 45 will soon be able to break bread in a recently renovated kitchen, thanks to a training partnership with the Maryland Army National Guard’s 244th Engineer Company.

The 244th contacted the office of Baltimore City Mayor Stephanie Rawlings-Blake in August 2012 regarding possibilities to take part in community-based training projects. Projects such as these help to improve military readiness while simultaneously providing quality services to communities throughout Maryland.

“It’s a good opportunity for us to do work in the community,” said Pfc. Keith Sims, a 244th interior electrician with seven years of experience. “It’s good training for Soldiers who don’t have the experience as some of us who do this in the civilian world.”

The mayor’s office identified numerous fire stations with substandard kitchens that could be refurbished as part of the training partnership. The chosen unit — Engine 45 — is a historic fixture in its community, having served the Mount Washington area since 1951.

Many of the firefighters spoke about the importance of the camaraderie associated with sharing a meal together.

“It was in fair shape when I got here, but it’s been in steady decline,” said pump operator Harry Jackson, a former Soldier and 14-year member of Engine 45. “I can’t remember the last time we cooked a meal using the stove in the kitchen.”

Many firefighters had stopped using the kitchen due to the poor condition of the stoves and sinks. Those who celebrated Father’s Day at the firehouse used the grill outside to cook their meals.

“It was falling apart,” said Lieutenant Henry Frazier, a firefighter with Engine 45. “Most of the stove burners didn’t work. The plumbing was bad. There were holes in the sink. It needed to be replaced.” Soldiers from the 244th gutted and cleaned the kitchen, painted the ceiling and installed cabinets. After the countertops were installed, the Soldiers completed the job by connecting the fixtures, the sink, the garbage disposal, stove, range hood and seven electrical outlets.

“It’s great to be in the spotlight. Anything that’s a positive reflection on both units (Engine 45 and the 224th) is great,” said Captain Jason Turner, a firefighter with Engine 45. “We’re the firefighters that work here who are in need of this repair. For us to receive this benefit, it’s overwhelming.”

The 244th is based out of the Melvin H. Cade Armory in Baltimore, the former home of the 231st Transportation Truck Battalion, the only Maryland National Guard unit ordered to active duty to support the Korean War. “I’m proud of them,” said Sgt. Nathan Schaffer, a squad leader in the 244th. “Just watching how much they’ve evolved from a year ago, and now they’re doing kitchens.”

This project gave leaders the opportunity to lead not just a small team of single trades but project management, added Schaffer. “A leader has to know how to keep track of plumbers, electricians and carpenters, working all three into a scenario so that they aren’t bumping into each other all day.”

The 244th was activated in 2006 and has responded to a variety of natural disasters in Maryland. The unit is scheduled to deploy to Afghanistan in September to fulfill its federal mission by building the infrastructure for the Afghan National Army. “While they’re getting ready to deploy, they’re here doing work in the community fulfilling [what] the state needs. I think it’s incredible that the Soldiers can be faced with both a federal and state mission and hold up their end,” said Brig. Gen. Peter C. Hinz, the assistant adjutant general-Army who began his officer career as a Maryland Army National Guard engineer. “They will have visible evidence of what they’ve done as part of their work in the Guard.” 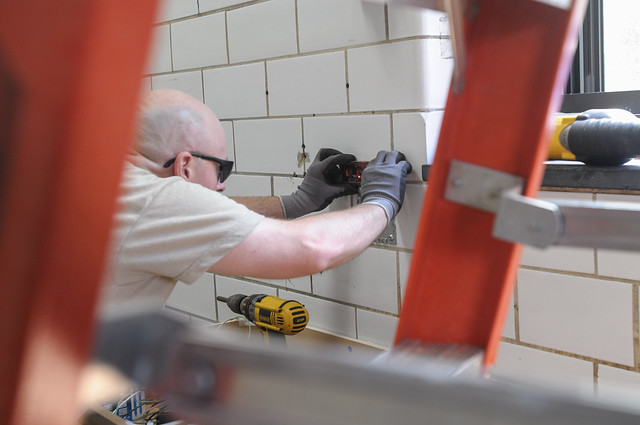