May 30, 2009, the drill floor at the Melvin H. Cade Armory was dedicated to 1st Sgt. Lloyd R. Scott, Sr., during a ceremony. Scott enlisted as a private at the end of World War II and was ordered to active duty to serve in Korea with the 231st Transportation Truck Battalion – now the 229th Main Support Battalion. Scott worked at Cade Armory from 1960 until his retirement in 1986 with 41 years and five months of military service. Scott joined the Army Sept. 7, 1945, and was assigned to the 231st which began as an African-American independent city militia company in Baltimore in February 1879.  The militia companies were patriotic social clubs made up of officers and enlisted who competed in military drills. The unit called itself “The Monumental City Guards” and was accepted as an infantry company in 1882 into the Maryland National Guard –and was re-designated the 1st Separate Company. In 1946, the all African-American unit was reorganized and federally recognized as the Headquarters and Headquarters Detachment, 231st Transportation Corps Truck Battalion and responsible for three truck companies.  Aug.  19, 1950, the 231st was mobilized to serve in Korea.  The 231st was the only Maryland National Guard unit ordered to active duty to support the Korean War. “We are here to honor a truly outstanding Soldier.  A Soldier as strong as the steel and blocks that make this building strong.  A Soldier who served our country and our state at a time when that dedication and loyalty may not have been fully understood or appreciated by some in our nation.  Not all of 1st Sgt. Scott’s battles were on the battlefields of Korea,” said Brig. Gen. James A. Adkins, the adjutant general of Maryland. “Just the thought to come in that armory and see how beautiful everything was,” said Effie G. Scott. “For the first time in my life I got to walk the red carpet.” Lloyd and Effie were married for 58 years before his death in 2005. A few years after 1951 his discharge Scott re-enlisted in the 231st as the battalion truck master, moving on to become an admin supply technician when the 231st was re-designated the 229th Supply and Transportation Battalion. “I had no idea that they had planned that event so beautifully for him,” said Effie G. Scott. “That was his love; he loved the military.” The Scotts raised 15 children. Many would join the U.S. Army, Air Force and Navy. “He worked hard, but he never brought his work home. When he came home, he came home to me and his family,” said Effie G. Scott. “1st Sgt. Scott was a leader and a mentor to so many.  He also followed in the footsteps of great leaders who went before him.  He stood in a long line of patriots who from generation to generation passed on the wisdom and skills needed by the young soldiers who followed them,” said Brig. Gen. James A. Adkins. ”He taught me that the word ‘I’ was the one least important that you can say and ‘We’ being the most important,” said 1st Sgt. Robert C. Bell (Ret.) “It was one of the proudest moments I’ve shared in that facility, and there have been many proud moments in that facility.” 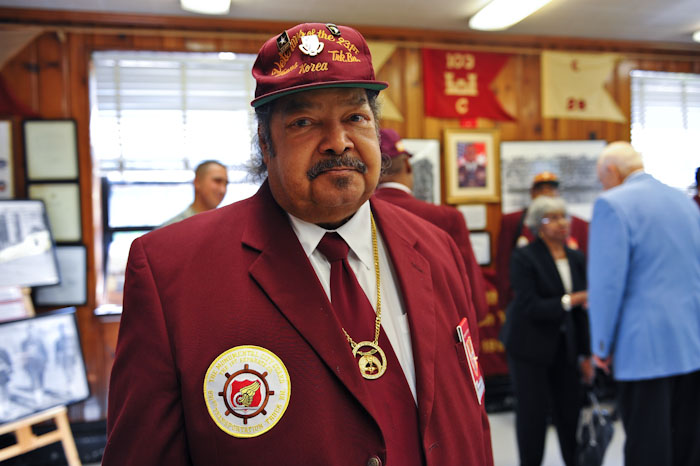