TOY Stories Blog: On My Knees with Meter Sticks 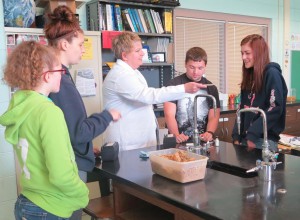 TOY Stories: An Education Blog Sharing Thoughts, Ideas and Strategies from Maryland’s Teachers of the Year.

Why you might ask was I on my knees with meter sticks in the front of my classroom? There is only one obvious answer; California condors. The mighty Gymnogyps californianus was proving to be one tough bird.

To make a long genetic bottleneck lesson short… species that have been driven to almost extinction tend to have very little genetic diversity; and the California condor is a prime example. If I had known that moments later I would indeed be kneeling on the floor with meter sticks in my hands; I may have picked say, the golden hamster? Would Mesocricetus auratus have had me on the floor? I don’t think so.

They just weren’t getting it, they had no guesses as to why a bird with a 10 foot wing span may have trouble hanging out in Southern California with a bunch of Homo sapiens? So I stepped out their wing span on the institutionally accommodating 12×12 tiles; still nothing. I’m getting a little wound up now, I think I may have started to spit when I talked at this point and I’m telling them “the bird is this big, like its wings are like two feet longer than each of my arms.”

Yep you know what happens next. I got out the meter sticks and I’ve extended my personally lame forelimbs out to the majestic 10-foot wing span of the California condor and I’m flapping around the room. Finally, one student says “you’d need a lot’a room for that kinda thing.” Someone else chimes in with “electric lines” then someone uses the h-word (habitat) and then the conversation gets all sciencey.

The point of this isn’t to say that education needs to be a performance, but it does need to recognize that we can’t rely on saying things louder and slower. We can’t just keep repeating ourselves. We need to recognize the blank faces and use all of our educational powers for good and think outside “the box.”

If I find myself kneeling beside “the box,” meter sticks in hand, peering at faces of understanding; so be it.

Addendum:  For those of you who wonder why I was on my knees; the majestic condor is only 4.5 feet tall, I am well over 5 feet, they also only weigh 30 pounds but there was nothing I could do about that!

Carol Detrick Garner served as Allegany County’s Teacher of the Year for 2013.

Welcome to MSDE’s T.O.Y. Stories Blog.  The blog capitalizes on the expertise of award-winning Teachers of the Year in Maryland who share educational ideas to promote the continued discussion of a wide range of topics. Issues to be discussed over this year may include parent engagement ideas, instructional strategies for increased achievement, educational innovation and reform – the Maryland college and Career-Ready Standards, new online PARCC state assessments, classroom management techniques and strategies and suggested solutions to various perceived education problems.

Articles do not endorse any educational product, service, curriculum or pedagogy.