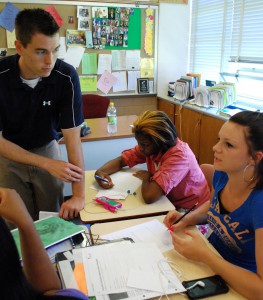 Detention is usually considered a punitive and preventative “last resort” for most teachers.  Early in my career I was reluctant to hand one out—only doing so for truly egregious behavior and when numerous other interventions had failed.  My thinking has evolved to seeing detention as a tool for restoring rapport and rebuilding skills in students who have become disengaged.

Jake was the definition of a “squirrely ninth grader” and that was before he had his daily energy drink.  He was a challenge for all his teachers, but found English particularly unappealing.  As we butted heads and frustration grew I was hesitant to assign detention to Jake, fearing that it would erode what was left of our rapport, but eventually it was unavoidable.  Jake plodded into my classroom after school and plopped into a desk, scowling.

In other years Jake would have remained there, stewing in frustration and anger toward me for the next 20 minutes. I would have scowled back and maybe assigned a menial task or two to really turn the screws. That year I had resolved to prioritize cultivating a culture of learning in my classroom.  A large part of that equation meant attending to the psyche, emotion and spirit of the children in my classroom with a focus I hadn’t applied before. Brain research, and common sense, tells us that emotions matter in learning.  When people have positive feelings about where they are and what they are doing, they are 31% more productive.  When students are “hopeful,” when they feel optimistic about their future and equipped to make that future happen, they achieve at about a letter grade better than similarly capable students who are not hopeful. Maybe it sounds “soft,” but feelings really do matter in learning.

So, as I watched Jake simmer in negativity I rethought detention.  I went over and started a conversation with Jake.  He was reluctant at first, still angry.  I told Jake about the time I got a detention for distracting my 6th grade class and getting them to run to the windows to see the Goodyear Blimp.  I told him another embarrassing story or two from my childhood. When he lightened up we talked about our class a little bit.  He shared some of his frustrations.  We looked at some of his work together.  We worked together to improve his skills and to address what we each needed from one another to make class more productive.  Detention became a conference and an opportunity to repair a relationship.

Jake received a couple more detentions throughout that semester.  Caffeine sometimes overpowered his better judgment.  But each of those few times we quickly got to work looking at Jake’s last few assignments or revising his drafts of the current writing assignment. Jake ended up doing quite well for himself in our English course.

My experiences with Jake continued to help my teaching to evolve.  He taught me that “punishment” could be restorative and that even in those difficult moments hold opportunity to build skills and rapport.  I’m no longer reluctant to assign detention, because now I see it as another tool to help improve the culture of our classroom and student achievement. Hopefully, you may too.

Sean McComb, an AVID teacher at Patapsco High School and Center for the Arts in Baltimore County, served as Maryland and National Teacher of the Year for 2014.