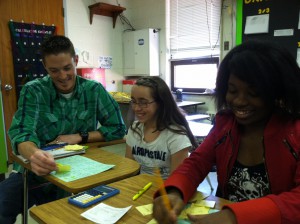 In my co-taught math classroom, the instructional team often includes student leaders.  Students in this class typically collaborate in a small group environment two to three times per week.

During this group work, I assign a student leader for each group.  Typically based on skill performance and personality, this person acts as a teacher/student ambassador who helps reinforce the skill(s) we are working on in class.  As we move from skill to skill and as personalities grow and mature, the students taking on this leadership role rotate.  It is very rewarding to see the responsibilities associated with this role increase as students take more and more ownership as the year progresses.

Students in a leadership role during group work offer other students in the group a new view on how to attack content material.  It never ceases to amaze me how some students that struggle when material is introduced (even after lots of practice) take charge of that very same material when a peer explains it.  Sometimes, it is a little short cut or trick that is offered and other times it is a totally different approach to solving a problem that helps ignite the light bulb!

Just last week, my class was working on subtracting fractions and mixed numbers.  In groups, peer leaders were showing tricks on how to re-group mixed numbers to prepare for subtraction and others were starting the whole process from the ground up to offer a different approach.  In both scenarios, mastery of the content was increased due to the creative work being done through peer-to-peer collaboration.

A “hidden” reward lies in the type of collaboration described here.  Student leaders often do not recognize the instructional benefit they are offering themselves during such work.  Through working with other students who need additional support, these student/teacher ambassadors inadvertently deepen their own understanding of both content material and the true meaning of positive collaboration.  Oftentimes, vocalizing the steps needed to solve a problem and taking the time to view a problem from the perspective of another student forces learners to think and work differently.

It is this different, outside-the-box thinking that offers student leaders an opportunity for deeper conceptual understanding.  Watching a proficient student struggle to understand another student’s failed attempts to solve a multi-step equation is difficult to watch at first.  Watching that very same student then transfer what he/she just discovered to graphing that very same equation during the following week of instruction is very rewarding to see (for the teacher, the proficient student, and the struggling student).

Student leaders are a vital part of my classroom.  Once students realize their own potential, take ownership of their learning, and recognize their ability to communicate and collaborate, we begin to grow and move towards true achievement!