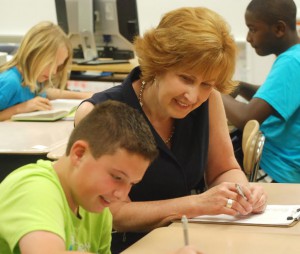 T.O.Y. Stories:  An Education Blog Sharing Thoughts, Ideas and Strategies from Maryland’s Teachers of the Year.

You know the kid.  He is the one who at six or seven years old already had a “reputation.”  He is the one whose name appeared on your class list and you groaned.  He smells bad, curses, never does his homework, bites other kids, carves his name into the desk, etc.  Yes, you know him.

Matt was that kid.  Matt moved to my fifth grade classroom from another county school.  It was several months into the school year.  He also came with a reputation.  When his mother had been sent to prison on drug charges, Matt came to our community to live with his grandmother.  She admitted that she had no idea what to do with him and had no intention of even trying.  She told me not to call.

Matt was a wild man!  Whether it was due to ADHD, his mother’s drug use during pregnancy, or having had to raise himself, Matt was out of control.  To say that dealing with Matt was a challenge would be an understatement.  Reaching out to him was nearly impossible.  He was violent and destructive.  At 10 years old, he had already built a wall around himself and had already defined himself as worthless.  He had no friends.

There was no miracle behavior management strategy that I employed with Matt.  Believe me, he was far beyond checklists, stickers, and incentives.  Instead, I just approached each day one at a time, and dealt with each incident one at a time.  It was hard; very, very hard.  We spent time together.  We talked.  Working with Matt took a tremendous amount of patience and creativity; more than I ever believed I had within me!  To be able to help Matt, I could not make excuses, and I could not sell myself short.

I often had to be ten steps ahead of Matt just to protect him from himself.  There was a tremendous amount of hurt and anger inside of that little boy.  I tried to help him see himself as more than the wild man he believed himself to be; to respect himself and feel a sense of self-worth and dignity.  I never gave up on Matt and I often wondered what happened to him after he left elementary school.  That was nearly 15 years ago.

It was after school about five years ago.  The secretary called down to my classroom and asked if a former student could stop in and see me.  Of course!  I love it when they visit!  Although many years had gone by, and he was a grown man, I recognized Matt right away.  You never forget your Matts.

Matt told me that he hadn’t planned on coming to see me that day.  He had been driving around and was reflecting on just how great his life is.  He has a job he really enjoys, working on cars in a body shop.  He has a loving wife and a beautiful six week old baby girl.  Matt told me that he had to come and see me that day.  Matt said, “Mrs. Cross, I am the man I am today because of you.”

It is impossible to put into words how much Matt’s visit meant to me.  Of course I felt overwhelmed knowing I had had such a positive impact on a child’s life, but Matt also made me realize just how much “the challenge” means to me.  It is the challenging students who taught me what it truly means to be kind and patient.  They taught me to give respect, even when I don’t receive respect in return.  They taught me to be compassionate; nearly every one of them has a story.  The challenging students taught me to never lower the bar for any student, no matter what their reputation might be.  They taught me that they need me, and I am there to serve them.  I MUST believe in myself in order to teach them to believe in themselves.

Anne Cross teaches 5th grade at Gunpowder Elementary School in Perry Hall.  She is Baltimore County’s 2014-15 Teacher of the Year.

Welcome to MSDE’s T.O.Y. Stories Blog.  The blog capitalizes on the expertise of award-winning Teachers of the Year in Maryland who share educational ideas to promote the continued discussion of a wide range of topics. Issues to be discussed over this year may include parent engagement ideas, instructional strategies for increased achievement, educational innovation and reform – the Maryland college and Career-Ready Standards, new online PARCC state assessments, classroom management techniques and strategies and suggested solutions to various perceived education problems.

Articles do not endorse any educational product, service, curriculum or pedagogy.