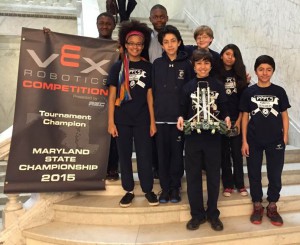 While most Baltimore City students spent the week after spring break settling back into the groove of school, four teams of middle and high school students left their classrooms to travel to Louisville, Kentucky and compete in the VEX Robotics World Championship. One team, from Patterson Park Public Charter School, didn’t just rely on their engineering skills to reach this achievement, but also used their social skills to get them to the top.

Due to a few technical problems early in the season, the team from Patterson Park Charter School, made up of four eighth graders and their robot S.U.S.A.N., ended the regular season placing 18th out of 46 Baltimore City teams. However, the Robotic Defenders, as their team is known, are skilled communicators and they convinced higher ranking teams to partner with them for the championship competition. Showing their tenacity, this three-team alliance became the Tournament Champions and qualified for the VEX Maryland State Championship.

After a competitive day of qualifying rounds at States, the Robotic Defenders again found themselves ranked towards the middle of the pack. They geared up their communication skills once more and convinced the top ranked team to pick them. This alliance won; sending these eighth graders and S.U.S.A.N. the robot to compete in the World Championship, where they won 4 out of 10 rounds. A couple members of the team shared their reflections on this culminating experience.

It was amazing to be at the VEX World Championship. When we arrived at the convention center, I suddenly saw just how many teams from so many different countries were there. I felt nervous and excited at the same time. I could tell my teammates were excited and so were my teachers. During our competitions, we had to find many ways to communicate with our foreign alliance members, which usually consisted of pointing and drawing. It did amaze me that we got to this stage of competition. Even though our team didn’t win, we had the most amazing experience. I can’t wait for next year.

I have had the amazing opportunity to participate in robotics this year at Patterson Park Public Charter School and to experience the VEX World Championships in Louisville, Kentucky.  As is true for all accomplishments, there was a lot of hard work that had to be done for us to get to the World Championship. My team and I had to meet twice a week for many months to prepare us for each competition and to better our robot. Although we worked very hard, there was still an element of surprise each time we won a competition.

The competitions ranged from the citywide level to the statewide level to the global level. As you can imagine, there was an even larger element of surprise when we won the statewide competition, solidifying our competing at the World Championship. There are many profound parts of the competition experience. For me, the most memorable was realizing just how many people were involved in this competition; people from around the state, country, and world, who have spent large amounts of time engineering their robots, just like we did. I am extremely grateful to be a part of VEX Robotics and the VEX World Championship.