FROSTBURG, MD (April 16, 2015) – As the eager high school students bored into the rich, soft soil to plant another tree sapling Wednesday, the Maryland Department of Environment’s reclaimed mine project, located up a steep grade from Sand Spring Run and near Frostburg State University’s football fields, came closer to an end. 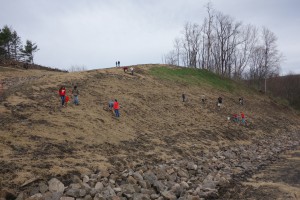 A total  of 39 students from Mountain Ridge High School in Frostburg and Allegany County Career and Technical Center in Cumberland, along with volunteers from MDE’s Mining Program and the federal Office of Surface Mining, combined to plant 1,700 trees on Wednesday at the four-acre site. Among the tree species planted were American chestnuts, white pines, black locust, black cherry, redbuds, willow oaks, spicebush and sycamores.

“This is a wonderful project to bring the land back to its natural state,” said Allegany County teacher Carol Garner, admiring the work of her students as they meticulously spaced the trees eight feet apart.

MDE’s Mark Carney said the abandoned coal mine site was active into the 1960s and has cost about $500,000 to remediate. Planting the trees, which kicked off a number of MDE Earth Day events around the state, is among the final steps in the project and will assist greatly in reducing sedimentation into Sand Spring Run, which is in the watershed of the Potomac River. The event was also held in recognition of Arbor Day.

The students received a great workout for nearly three hours and received gift tokens of appreciation for their efforts from MDE.  They also listened to lectures about sustainability, including the history of the American chestnut and how it was once the dominant species of trees in the forest stretching from Maine to Alabama and used traditionally for a number of products, including furniture, cradles and coffins.

“I would like to thank all the students and our volunteers for their hard work and getting so much of the tree planting done,” Carney said. “They will be able to admire the work they did for many years after this restoration is completed.”

The mission of MDE’s Mining Program is to protect the public and the environment from the potential impacts of active mining and to promote the restoration and enhancement of active and abandoned mine land and water resources. The Mining Program’s Abandoned Mine Lands Division performs reclamation of abandoned (pre-1977 mining law) coal mines, land and remediation of acid mine drainage from coal mines in Allegany and Garrett counties.