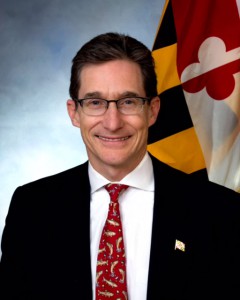 Allow me to introduce myself (and, yes, Grumbles really is my last name). Serving as Maryland’s eighth Secretary of the Environment, nominated by Governor Larry Hogan in January and confirmed by the Maryland Senate in March, means there’s a lot of excitement and gratitude in the Grumbles household these days. I am deeply honored to serve the Governor and the citizens of Maryland, and I am committed to ensuring our environmental progress continues and thrives in new and collaborative ways.

Most recently, I was President of the U.S. Water Alliance, a national environmental non-profit educating the public on the value of water and the need for innovative and sustainable solutions. We have been convening public and private sector thought leaders and other strange bedfellows to shape “One Water,” integrated and holistic policies and practices.

Some of you may also know me from one of my previous roles: heading up for six years the U.S. Environmental Protection Agency’s National Water Program, which included oversight of the Chesapeake Bay and implementation of Clean Water Act and Safe Drinking Water Act programs across the nation. Prior to that, I got to work closely with the Maryland Congressional delegation for more than 15 years, serving as counsel and senior staff member on the Transportation and Infrastructure and Science Committees in the U.S. House of Representatives. In 2009 and 2010 I worked in Arizona, first as environmental advisor to the Governor and then as Director of Arizona’s Department of Environmental Quality, where much of my focus was on energy, climate, air pollution, waste management and the nexus among water, food, energy and transportation.

My priorities at MDE include: providing the best customer service possible, to citizens, businesses, communities and ecosystems; embracing innovations in technology, regulation and finance; and fostering a culture of collaboration. By working together and employing a variety of tools and strategies, including regulation and enforcement, we can accelerate the pace of environmental progress while maintaining our economic competitiveness. That’s the sweet spot that makes Grumbles happy.

If you have suggestions, gripes, and/or generic grumbles, feel free to email me at
mde.secretary@maryland.gov. I look forward to working with you and the dedicated employees of MDE towards a cleaner, healthier, better Maryland.

March 13, 2015: Sworn in as Secretary of the Maryland Department of the Environment

For the first time in six years, state regulators have opened the Narrows in Queen Anne’s County to shellfish harvesting – a rare instance of watermen gaining fresh territory to work and a welcome change after an icy season that undercut the state’s shellfish industry.. Read more

The Aegis: Maryland environment chief talks about importance of groundwater in visit to Hickory Elementary

WYPR-FM: Sparrows Point, cleaning up after a century of making steel

The new owners of Sparrows Point have ambitious plans to redevelop the 3,100 acres on the lower east side of Baltimore County. But at the same time, they are beginning a massive cleanup for the industrial site where steel was made for more than a century. Read more

The abundant trash littering Baltimore area streams and the harbor will have to be cleaned up under new pollution limits set by federal and state regulators, the Environmental Protection Agency announced. The City and Baltimore County would be required to remove or prevent hundreds of tons of trash and debris from being washed or dumped annually into the Jones Falls, Gwynns Falls and the lower Patapsco River under the limits approved by EPA and the Maryland Department of the Environment. Read more 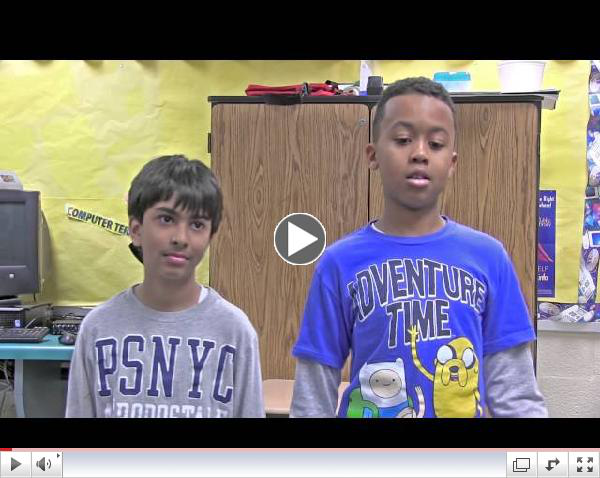 In recognition of groundwater being one of the earth’s most valuable and limited natural resources, Maryland joined with dozens of other local, state, non and for-profit businesses to celebrate National Groundwater Awareness Week, March 8-14. MDE Secretary Ben Grumbles met with students at Hickory Elementary School in Harford County. The students learned how groundwater is created and used in our daily lives, how it can potentially be contaminated and what we as citizens of Maryland can do to protect it.

Nominations being accepted for the 38th annual Tawes and Coulter awards

Nominations are now being accepted for the 2015 Tawes Award for a Clean Environment and for the James B. Coulter Government Employee Award. The Tawes Award recognizes individuals, civic, community and non-profit groups that have demonstrated outstanding efforts to enhance Maryland’s environment over a period of time or with a single project. There are separate categories for youth and adults. The Tawes Award winner’s favorite non-profit group will receive a $300 donation in their name. The James B. Coulter Award acknowledges outstanding environmental contributions by a government employee.

The deadline for nominations is April 14. Nomination forms are available on MDE’s website, and may be submitted by email to TAWES.AWARD@maryland.gov or by mail to: Maryland Department of the Environment, Office of Communications, 7th Floor, 1800 Washington Boulevard, Baltimore, MD  21230, Attention: Adrienne Diaczok – Tawes Award.

MDE accepting applications for 2015 Environmental Science Student Award and Internship Program
The Award recognizes high school seniors who have excelled in environmental science both inside and outside the classroom. Students who have demonstrated extraordinary leadership and participation in environmental projects in school or their community such as recycling drives, school beautification projects, stream or litter cleanups and other types of environmental projects are encouraged to apply. The grand prize winner will receive a paid internship at MDE during summer 2015. The second-place winner will receive $500 and the third-place winner will receive $250.
The deadline for nominations is May 1. Application forms and instructions are available on MDE’s website and may be submitted by email to Nadine.Jackson-Bey@maryland.gov or by mail to: Maryland Department of the Environment, Office of the Secretary, 1800 Washington Boulevard, 7th Floor, Baltimore MD 21230, Attention: Nadine Jackson-Bey.
Read more
Take the Compost Challenge

Did you know that food scraps and yard waste make up nearly a third of the municipal waste stream? Food waste reduction and composting offer a viable solution (and a nutrient-rich soil supplement), and a growing number of Maryland Green Registry and Maryland Green Travel members have been leading the way. Your business or organization is invited to join the Registry — and take the Compost Challenge. 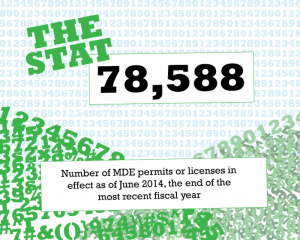 MDE issues many different types of approvals. These range from simple registrations to licenses for individuals to permits that contain specific limitations on pollutants. The first step in the process is determining what approvals may be necessary for the activity you have planned. MDE has a variety of resources to help, including an online Permit Guide.