Biking to work is a great way to reduce air and water pollution and get some exercise. MDE is again participating in Bike to Work Day – and we urge you to join in as well.

Workplaces throughout Maryland will be encouraging their employees to leave their cars behind this Friday, May 16, and pedal to work instead. 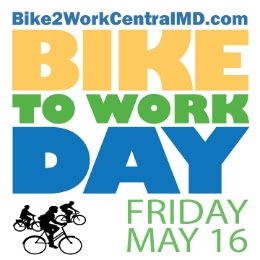 Bike to Work Day is celebrated across the United States each May – which is Clean Commute Month. Late spring marks the start of the ground-level ozone season, when we hear about Code Red and Orange Ozone Action Days. On those days, the air is dangerous to breathe – especially for the young and for the elderly. Emissions from single occupancy vehicles contribute significantly to our region’s sometimes-dangerous ozone levels. Bike commuting can improve the air we breathe. It can also reduce emissions of the greenhouse gases that cause climate change.

“Replacing the car with alternative forms of transportation helps to reduce your carbon footprint, conserve energy, save money, reduce air pollution, get exercise and set an example for others,” MDE Secretary Robert M. Summers said while encouraging MDE employees to participate in Bike to Work Day.

In the Baltimore area, rallies are scheduled to be held at . . .

No matter who or what is ultimately deemed responsible for last week’s dramatic landslide that caused a major portion of East 26th Street to collapse onto adjoining CSX tracks, it’s clear that unusually heavy rains played a role. … What’s worrisome is that this vulnerability – a city’s aging infrastructure pitted against unusually severe weather – is likely to become an even greater problem in the future. At least that’s one of the concerns raised this week by the National Climate Assessment, which found that climate change is already having an adverse impact on the nation. Read more

May is Clean Commute Month

For residents and commuters through Maryland, a large number of programs, services, and events exist to help reduce the impact of commuting. The month of May has been designated Clean Commute Month and a number of promotional events take place leading up to and during the month. Although promotional events occur in May, every month is a good time to evaluate your commuting habits to reduce expenses, emissions, and time. 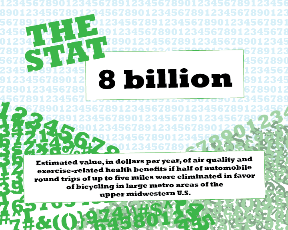 A team led by researchers from the University of Wisconsin at Madison found that eliminating half of automobile trips of up to five miles in 11 large metropolitan areas of the upper midwestern United States and bicycling instead would provide more than $8 billion a year in health benefits from improved air quality and physical fitness.