BALTIMORE, MD (January 7, 2014) – In a ceremony earlier today, Maryland Department of the 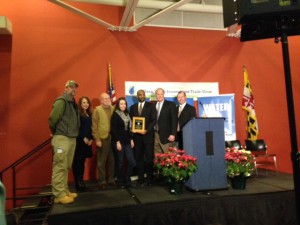 Environment Secretary Robert M. Summers and Maryland Department of Natural Resources Secretary Joe Gill presented the Parks and People Foundation with the Smart, Green & Growing (SGG) Award for Innovations in Stormwater Management for a project that reduced stormwater runoff through multiple best management practices at the New Broadway East Community Park in Baltimore City.  The SGG award recognizes groups, organizations, county and municipal governments and projects that have fostered the creation of new approaches to address the impact of stormwater runoff pollution in Maryland.

The award was presented at the third annual SGG Clean Water Innovations Trade Show in Baltimore, which featured exhibitions of stormwater and water quality solutions. The Trade Show is a culmination of MDE’s Stormwater Innovations Tour, a campaign to show the public projects already underway around the state to reduce stormwater pollution.

MORE INFORMATION:
More than 300 people registered to attend the event. Thirty-nine exhibitors featured products and services for environmentally-sensitive site design and restoration of wetlands, streams and other ecosystems.

The Trade Show was an initiative developed at a 2011 “Maryland Forward” forum on sustainability. It was inspired by the suggestion of Governor Martin O’Malley to bring together Maryland businesses with developers and local governments to work on cost-effective solutions to reduce stormwater runoff pollution and other water quality issues.

“Under the leadership of the O’Malley-Brown Administration, Maryland continues to make great strides in improving the quality of our groundwater, streams and rivers, but there is still more that needs to be done.  Local governments, communities and non-profit organizations are working together to address stormwater in Maryland, not because they have to, but because they know it is the right thing to do.  All Marylanders benefit when the public and private sectors work with one another to encourage innovation and protect our natural resources. This event is an important part of that effort.”

“Congratulations to the Parks and People Foundation for their receipt of the 2013 Smart, Green & Growing Award for Innovations in Stormwater Management. The NewBroadwayEastCommunityPark project is an outstanding example of what can be achieved when state, local and private stakeholders partner.  This project not only changed the landscape of one Baltimore neighborhood from dilapidated row houses to trees, green space and native species, but also implemented innovative stormwater filtration to protect our waterways.”