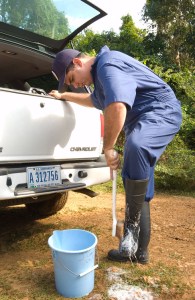 ANNAPOLIS, MD – The Maryland Secretary of Agriculture has extended Emergency Orders to prevent High Path Avian Influenza from infecting Maryland poultry flocks. These measures are in response to the continuing threat of an outbreak. USDA Animal and Plant Health Inspection Service (APHIS) today detected the presence of the H5N2 strain of avian influenza in a wild mallard duck in Montana. There has been no detection of associated illness or mortality in domestic poultry, but this serves as a timely reminder of the continuing threat of HPAI in the United States.

The state’s quarantine orders require all hatching eggs and poultry entering the state to be tested within 21 days or come from certified clean sources. Poultry markets must maintain records of all birds sold or purchased.  The quarantine orders also, all commercial poultry farms must meet basic biosecurity and sanitation practices, including:

Poultry exhibitions–including those with waterfowl– will now be allowed, but all poultry must be tested within 21 days of entry to an exhibition or originate from a U.S. National Poultry Improvement Plan (NPIP) clean flock or state monitored AI H5/H7 flock. Poultry auctions are not currently impacted by the Order because Maryland Department of Agriculture Animal Health officials are onsite at all auctions, examining and testing birds. However, if High Path Avian Influenza is suspected in the region, poultry auctions, markets, and exhibitions will be closed down.

“This highly virulent strain of avian influenza could be an economic disaster for our largest agricultural sector if we don’t take steps to protect the birds,” said Agriculture Secretary Joe Bartenfelder. “We have every reason to believe that High Path Avian Influenza will remain a threat for years to come, and we are making every effort to keep it out of our commercial chicken houses and backyard flocks. I strongly encourage all flock owners and managers to take this disease very seriously and to practice enhanced biosecurity at all times.”

High Path Avian Influenza entered the Pacific Northwest of the United States in December 2014 and has infected backyard, commercial turkey and commercial chicken flocks from December through August 2015, and one flock in January 2016. It is carried by migratory waterfowl, such as ducks and geese, among others. To date, High Path Avian Influenza has been confirmed at 231 locations in 15 states and has impacted over 50 million birds. The virus does not live in hot temperatures so incidents of HPAI decline over the summer, but animal health experts expect cases to appear again during the fall migratory season, which starts in Maryland in early September.

High Path Avian Influenza is not known to threaten human health. It can, however, wipe out flocks of chickens in days. The Department encourages all flock owners of all sizes to exercise enhanced biosecurity measures and to be vigilant in ensuring others on their farms do so as well.

The Maryland Department of Agriculture has created a page on its website dedicated solely to HPAI information and news. It also contains information on biosecurity measures flock owners should take to protect their birds. Visit mda.maryland.gov/AvianFlu for more information.

If you have any questions, need additional information or would like to arrange an interview, please contact: