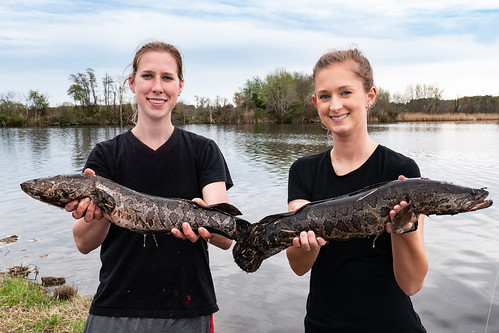 In an effort to monitor invasive northern snakeheads in the Chesapeake Bay and Blackwater River, the Maryland Department of Natural Resources (DNR) announces a new tagging program in conjunction with the U.S. Fish and Wildlife Service (USFWS).

Both agencies are placing yellow or blue tags on up to 500 northern snakeheads. Each tagged northern snakehead caught and harvested from now until 2024 could be rewarded with a gift card of $10 or $200 depending on the tag.

By measuring the amount of northern snakehead harvested, the agencies will learn if population benchmarks are being reached and help control the spread of the species.

The population of snakeheads has been increasing in the upper Chesapeake Bay and is likely the top fish species that eats other fish in the Blackwater River. Harvesting snakeheads helps reduce predation pressure on the state’s natural resources, and the fish is also considered a flavorful and nutritious food source.

It is illegal to transport a live northern snakehead in Maryland and surrounding states. More information on snakeheads is available on the DNR website.

Anyone fishing in Maryland waters who is 16 years of age or older must have a valid Maryland fishing license. More information on licenses and how to get them is also on the DNR website.